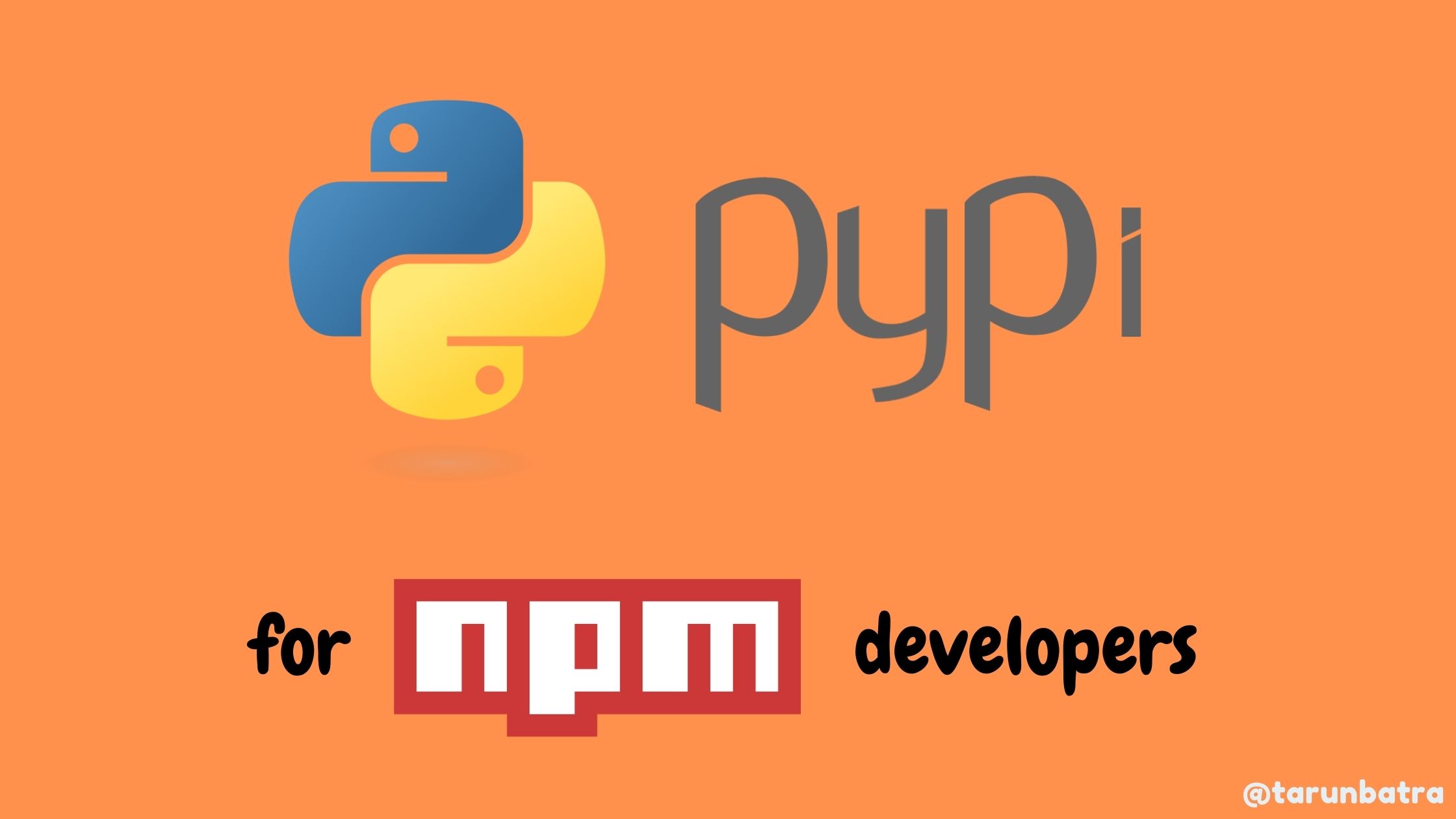 If you are a developer in Javascript / Node.js ecosystem, you have used npm. It’s the world’s largest software registry and the ecosystem around it is advanced and mature. I realized it when I tried to port password-validator, an open source npm package I maintain, to Python. I spent weeks to figure out things which were very intuitive to me in the Javascript world. This blog will list down some of the key differences I found between the two ecosystems for anybody else who treads the same path. By the end of this post, we should be able to install our package using:

What is a package?

In npm, any folder which has a package.json file is a package. In Python world, we need a file called setup.py in the root folder to make our project a package for PyPi, a common repository for Python packages. This file is used to declare meta data like name, version, author, and even dependencies (with a catch). Look at this sample setup.py file to get an idea.

Normally, the actual package code goes inside a directory with the package name and it is required to have a __init__.py file in it to indicate that it is a module. So the directory structure would look more or less like:

In this structure your actual package code will go in __init__.py and/or any other python file in this directory like lib.py.

Instead, a combination of a virtual environment and requirements file is used.

There are multiple ways of setting up a virtual environment, like venv and virtualenv. I found former to be the easiest to use.

Every virtual environment has its own pip and Python distribution. So it’s a clean slate when you start. When we install dependencies, we can make a log of them using:

This will log all the packages and their versions installed by pip in the file requirements.txt. The file name can be anything but it’s a convention in the Python community to use this name. There is no concept of devDependencies in Python but it’s not uncommon for some projects to have a requirements-dev.txt to log devDependencies of the project. Here’s a sample requirements file.

Installing a project’s dependencies now can be done with:

JSDocs is the most common way to document code in JavaScript and the list of documentation tools alomst stops there. Documentation in Python is taken very seriously.

Sphinx is a documentation generator for Python which can be used in various ways thanks to a variety of extensions available. To get started with sphinx, we need a conf.py file which will have configuration for sphinx. The file can be generated using sphinx-quickstart CLI utility. Here’s a sample conf.py file to get started.

Sphinx and Python ecosystem prefers using reStructuredText (reST) for documentation instead of Markdown which is common in the JavaScript world. M↓ can be used with Sphinx too, but it’s a bit of work and reST is very similar to M↓. Here’s a sample README in reST.

Sphinx can look through special comments in Python code and include them in the documentation. These comments which are called Docstrings are used to describe functions, classes etc. and are very similar to JSDocs in JavaScript and JavaDocs in Java. Here’s a method documented with Docstrings:

There are a number of formats for writing Docstrings, which can be a topic discussion in itself. I found myself going back to this guide by RealPython and I recommend giving it a read for a deeper understanding of Docstrings. Using the combination of reSt files and Docstrings, we can generate documentation using Sphinx in a form like PDF and HTML. Here’s a sample HTML documentation generated using Sphinx.

There are less popular alternatives to Sphinx which can also be used for documentation, most notable being ReadTheDocs.

I found writing unit tests in Python easier than in JavaScript due to the availability of mature and built-in tools.

Python has a built-in module unittest which can be used to run the tests. The syntax is very similar to Jest or Mocha. Every “test” is a class and every class method is a test case. Methods like setUp() and teardown() have special meanings and are equivalent to before and after methods seen in JavaScript testing frameworks. Here’s a sample test file. Tests are run by:

Pytest and nose2 are some of the alternatives but I found unittest adequate.

Earlier in Documentation section, we discussed about Docstrings. The Examples section in a Docstring provide the user an understanding of how to use the function. What’s great is we can also run the example against an automated unit test, using doctest (another built-in module). This can keep the documentation and implementation in sync.

Packages can be publushed to PyPi after building. Earlier the builds were made in Egg format, however now it is being replaced by Wheel format. To create a wheel build, we need to install setuptools and wheel.

Now the build can be created by running:

This will create two files in dist folder:

Now we need to upload the package build to PyPi. We need twine for that.

Final step, the uploading of the build:

--repository here lets you select a specific package repository like custom or private npm registeries. It can be configured with a .pypirc file.

Two resources which helped me a lot in fuguring out my issues were:

It was an interesting experience for me to tackle all the challenges faced when I was on a journey to publish my first package on PyPi. A mature testing frameworks was a breath of fresh air while dependency management and documentation generation was a daunting task due to all the different tools to manage. In the end I published password_validator and I am happy with the result.

Do reach out in comments or on my Twitter if you have any issues with the steps I have mentioned here. Happy publishing!